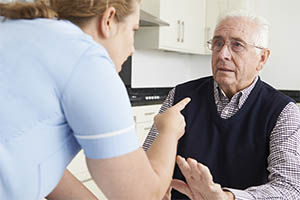 With more nursing homes and other assisted living facilities popping up every year as more and more baby boomers age and retire, abuse of the elderly in nursing homes has become a major issue in the United States.  Nursing home abuse persists in many different forms, including physical abuse, sexual abuse, financial exploitation, neglect or negligence, medical errors, and prescription errors.  However, one of the most common forms of nursing home abuse is emotional abuse, which is also referred to as psychological abuse.  Often times, emotional abuse goes along with the other forms of abuse, like physical abuse, as an ancillary side effect.  Unfortunately, emotional abuse in nursing homes is also probably the most difficult form of abuse to spot.

As one can see, emotional abuse can include verbal and nonverbal acts toward a resident.  These acts are most often committed by members of the nursing home staff or other residents of the home, but they can also be committed by volunteers or visiting family members.